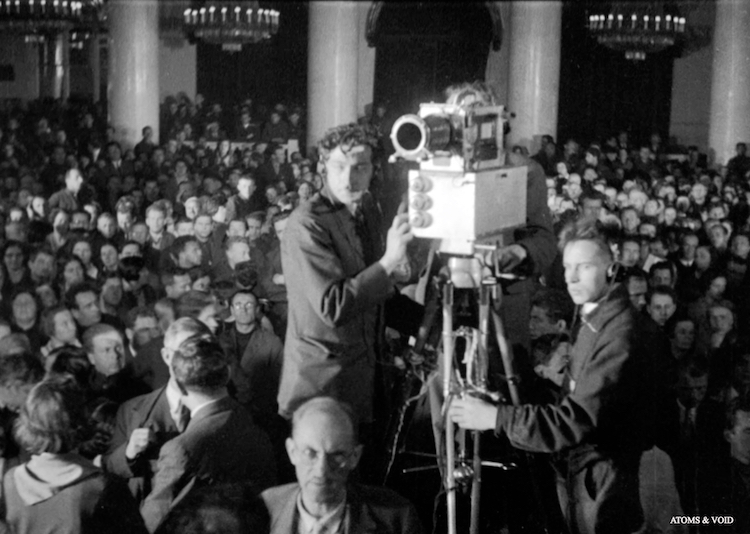 The Trial (2018), a documentary by Ukrainian filmmaker Sergei Loznitsa, uses a remarkable trove of found footage to reconstruct one of Joseph Stalin's first show trials, which took place in 1930 in Moscow. When a group of top-ranking economists and engineers are accused of plotting a coup against the Soviet government, the court alleges that they made a secret pact with the French Prime Minister, Raymond Poincaré, and with other Western political leaders, aiming to destroy the Soviet power, restore capitalism, and break up the USSR. All charges are fabricated, and the accused are forced to confess to crimes they never committed. The court — presided over by Andrey Vyshinsky, who later became known as a diabolical prosecutor and advocate of mass repressions — delivers death verdicts. Filmed as if on a 1930s sound studio with blocky set pieces, Loznitsa's montage reveals the theatrical nature of the farce and emphasizes the “show” element of the trial, one replete with rapt spectators and dramatic performances by a host of “actors” — prosecutors, witnesses, defendants, and judges alike. Offering fresh insights into the origins of Stalin's regime, The Trial is a fascinating and Kafkaesque historical document with obvious contemporary resonance. 127 minutes. Black and white. Russian with English subtitles.

The film will be introduced by Yuliya Ilchuk (Assistant Professor, Slavic Languages and Literatures, Stanford University), and a post-screening discussion will follow with Yuliya Ilchuk and Anke Giesen (Memorial Germany).

This event is presented as part of the Cultures of Protest in Contemporary Ukraine, Belarus and Russia workshop, a three-day series of events that aims to create a productive dialogue among Ukrainian, Belarusian, and Russian intellectuals and artists who share the values of democratic governance, human and civil rights, and freedom of artistic expression, as well as among scholars of the recent history and culture of these three countries. Related events include a musical performance by Belarusian singer and ethnographer Siarhei Douhushau (Feb 28) and a roundtable discussion with Vasyl Cherepanyn, Ales Bialiatski, Sergey Parkhomenko (March 1). Co-sponsored by the Center for East European and Russian/Eurasian Studies (CEERES), the Department of Comparative Literature, the Department of Slavic Languages and Literatures, and the Pozen Center for Human Rights at the University of Chicago.