Data as Critique: New Computational Approaches to the Study of Culture 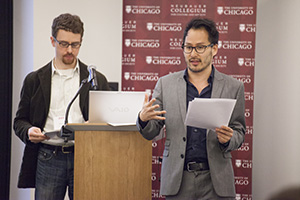 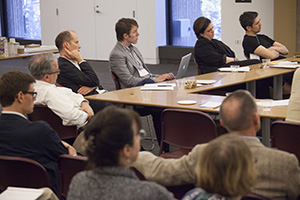 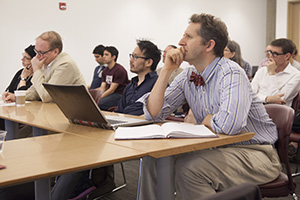 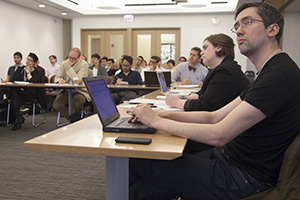 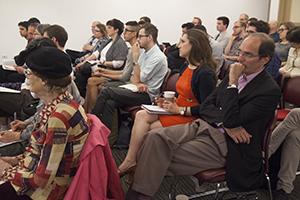 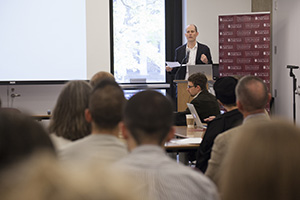 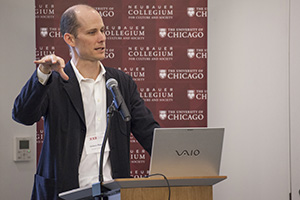 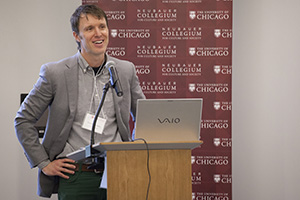 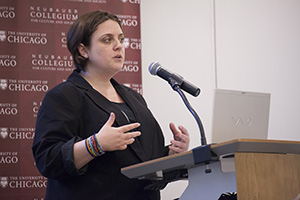 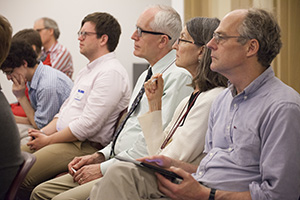 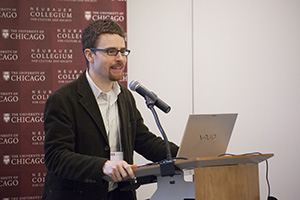 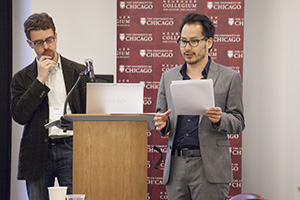 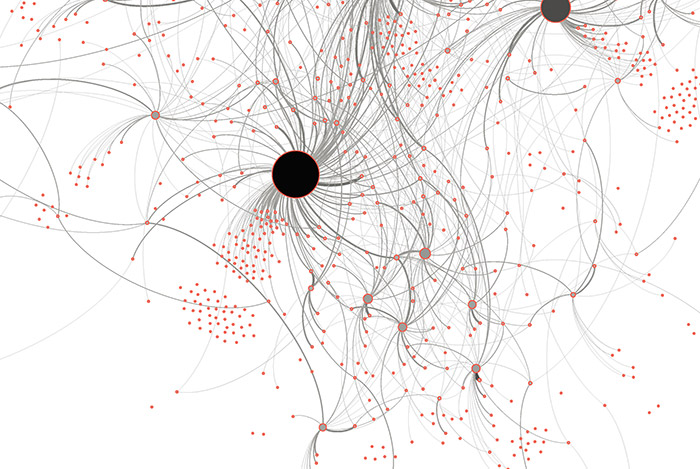 The “Global Literary Networks” project hosted this one-day conference, bringing together new scholarship on the history and sociology of global culture. The conference highlighted research that cuts across the traditional division of qualitative methods (hermeneutics, historicism) from quantitative or data-driven ones (text-mining, network analysis). A major goal of the conference was to explore how large-scale computational techniques can extend an already century old dialogue between scholars in the humanistic and social sciences (e.g., literature and linguistics; history and statistics; art and sociology).

Global Literary Networks was a project that combined qualitative and quantitative methods to examine the creation, diffusion, and circulation of literature in a global context. Our focus was on modernist poetry (1915-1930) from the United States, Latin America, China, Japan, and France. In method, we leveraged large-scale publication metadata and digitized texts in order to integrate techniques in social network analysis and machine learning with cultural history and close reading. Most broadly, we were interested in exploring the convergence and divergence of cultural forms on a global scale and in framing culture as a world system.

“Data as Critique” was an opportunity to bring this project into contact with scholars from a variety of fields—including sociology, computer science, and comparative literature—who are working on related questions of scale. Some major questions we hoped to explore included: how do new computational tools, such as natural language processing, alter our conception of what “texts” or cultural objects are? How can we reconcile traditional human forms of interpretation with the epistemology of computers and machine algorithms? How can we scale up analytical attention to individual aesthetic texts so as to perceive broader patterns and systems of relation and thought?

The conference consisted of two sessions: one devoted to “networks” and the other focused on “texts.”  Each session included three presentations followed by a roundtable discussion led by two University of Chicago faculty. The goal of each roundtable was to brainstorm and extend the ideas of the talks in an informal way, both among panelists and with the audience. The conference, in sum, aimed to create a space where faculty and students from the humanities, sciences, and social sciences could engage in dialogue about data as a critical method for the interpretation of culture.

• Jacob Foster, “Finding Cultural Holes: How Structure and Culture Diverge in Networks of Scholarly Communication”
• Jennifer Lena, “Why Listening is Overrated: A Relational Approach to Classifying Style and Excellence in Music”
• Hoyt Long and Richard So, “Form in the Machine: Tracing Imitation and Influence in the American Haiku” 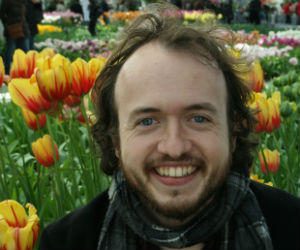 Jacob Foster is Assistant Professor in the Department of Sociology at the University of California, Los Angeles. He is interested in the birth, life, and death of ideas. Currently, he works on computational approaches to the sociology of science. By fitting rich models of discovery and impact to data extracted from articles and patents, he infers the strategies, preferences, and social processes that shape the production and persistence of new ideas. This effort is embedded in a larger project to understand -- and discover computationally -- the beliefs, biases, and heuristics that guide scientists in their exploration of the natural world. He hopes to thereby shine quantitative light on classic questions in the sociology of science. 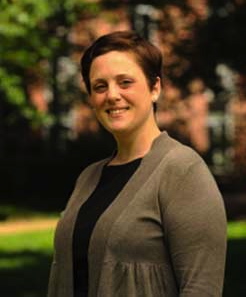 Jennifer C. Lena is Associate Professor of Arts Administration and Sociology at Teachers College, Columbia University. She also holds an appointment as Senior Research Scholar for the Strategic National Arts Alumni Project (SNAAP) at Indiana University. Her research focuses on understanding processes of classification, particularly the organizational and institutional conditions for the creation, modification, or elimination of cultural categories like genres. She is the author of Banding Together: How Communities Create Genres in Popular Music (Princeton University Press, 2012), which was named one of Choice Reviews Outstanding Academic Titles for 2012. 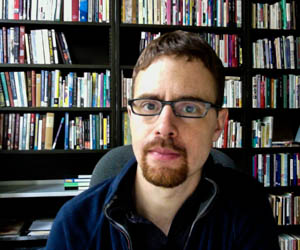 Hoyt Long is Assistant Professor of Japanese Literature in East Asian Languages and Civilizations at the University of Chicago. His research and teaching center on modern Japan, with particular interests in regional literature, publishing history, media and communication, and environmental history. He also has an interest in the application of social-scientific methods to the study of how texts and ideas emerge and circulate within social and material systems. Specifically, he explores how social network analysis, text-mining, and other computational methods can facilitate large scale comparative inquiries into the social dynamics of literary and artistic production. As one of the principal investigators of the Global Literary Networks project, he is currently at work on a series of collaborative essays that aims to integrate these methods with traditional questions in literary history and criticism. 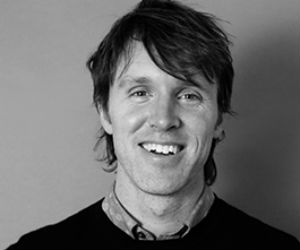 Tom McEnaney is Assistant Professor of Comparative Literature at Cornell University. His research interests include the history of media and technology, sound studies, discourse theory, linguistic anthropology, and new media studies. His work includes articles about tape technology and the novel in Argentina, the timbre of public radio in the United States, the use of digital photography in the construction of divided global and national publics in Cuba, and the poetics of play and historiography in the writings of Borges and Benjamin. He is collaborating with Hoyt Long and Richard So at the University of Chicago on a digital humanities project that examines the circulation of poetry and the formation of transnational social networks across the Americas, East Asia, and France (Global Literary Networks). 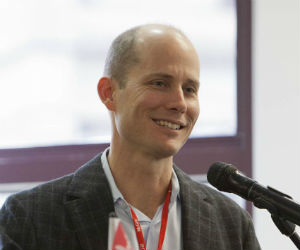 Andrew Piper is Associate Professor and William Dawson Scholar in the Department of Languages, Literatures, and Cultures at McGill University. His work explores the application of computational approaches to the study of literature and culture with a particular emphasis on network theory. He directs the Digging into Data Project, Global Currents: Cultures of Literary Networks, 1050-1900, and the multinational partnership grant, NovelTM: Text Mining the Novel. He is the author most recently of Book Was There: Reading in Electronic Times (University of Chicago Press). 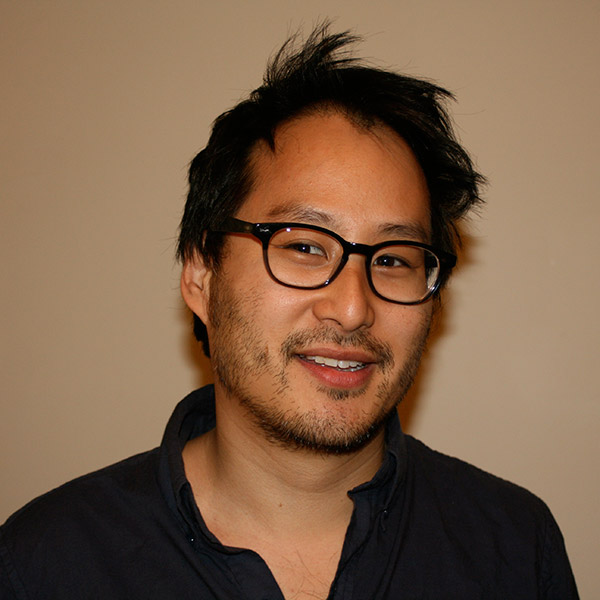 Richard So is Assistant Professor in the Department of English at the University of Chicago. Broadly speaking, his teaching and research interests center on modern American literature in a transnational context. Within this area, he is interested in theories of cultural transnationalism, the history of media and communications, and the "Pacific" (which includes U.S., Asian American, and East Asian cultures) as a coherent area of study. He also does substantial work in the digital humanities. He is interested in the use of new computational and social scientific methods, such as text mining, to model a form of textual criticism that mediates between distant and close reading approaches. He is currently completing a book project titled Republic of Mind: The Rise and Fall of a U.S.-China Literary and Communications Network, 1929-1955. 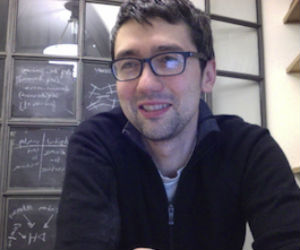 Dennis Tenen is Assistant Professor of English and Comparative Literature at Columbia University. He writes and teaches in the fields of new media and digital humanities. His research often happens at the intersection of texts, people, and technology. His recent projects include an article on the infrastructure of book piracy, a tutorial on sustainable authorship in plain text, and a Tweeter bot that beacons time using literary quotes. He is currently writing a book on Algorithmic Imagination.