HUTOPIA was the second chapter in an ongoing investigation of the relationship between philosophical reflection and the condition of exile or escape – a Chicago-styled follow-up to the exhibition Machines à Penser, conceived by Dieter Roelstraete for the Fondazione Prada in Venice in conjunction with the 2018 Architecture Biennale.

Dedicated to the curious architectural phenomenon of the philosopher’s retreat, HUTOPIA took as its point of departure two famous philosopher’s huts: Martin Heidegger’s Black Forest cabin in the German village of Todtnauberg and the lesser-known mountain refuge built by Ludwig Wittgenstein in the remote Norwegian village of Skjolden. Both huts were constructed around the same time – in the early 1920s and late 1910s, respectively – to serve the same purpose: offering their occupants the kind of isolation conducive to thinking the kind of thoughts that would go on to revolutionize twentieth-century philosophy. Completing the triumvirate of modern German-language thought is Theodor Adorno, whose theorizing was decisively shaped by his American exile – another kind of philosopher’s retreat. (Adorno, of course, was one of Heidegger’s harshest postwar critics, and likewise dismissive of Wittgenstein’s philosophy, while Heidegger and Wittgenstein were distantly respectful of each other’s undertakings. In this way, HUTOPIA doubled as an exploration of twentieth-century German thought.)

Named after a poem composed by participating artist-poet Alec Finlay, HUTOPIA brought together sculptures and photographs by Goshka Macuga, Guy Moreton, and Ewan Telford alongside historical photographs by Digne Meller-Marcovicz, each of which shed light on our protagonists’ titular “machines for thinking” – the “hutopian” outposts from which some of their sharpest insights were sent into the world. The centerpiece of HUTOPIA, however, were the artist-built, scaled-down replicas of Heidegger’s and Wittgenstein’s huts as imagined by Chicago-based artist John Preus, installed outside the Neubauer Collegium. A third hut built by Preus and loosely modeled after a 1980s Ian Hamilton Finlay sculpture titled Adorno’s Hut occupied the gallery and doubled as a display structure for the aforementioned photo work. Although these structures were sculptures first and foremost, they could be entered and were occasionally put to appropriate social use, acting as classrooms, gathering spaces, and places of solitary concentration.

Over the years, both Heidegger’s hut and the site of Wittgenstein’s hut (which, after having been dismantled in the 1970s, is being rebuilt on the spot) have become unlikely destinations for a species of philosophical tourism – pilgrimage sites, in truth – and artists in particular have long made work in response to the mystique of these buildings’ isolation. Behind and underneath these anecdotes, however, loomed this unfolding research project’s true concerns: not just the matter of where thinking takes place, but above all that of the three modes of productive disentanglement proposed by Wittgenstein’s Hut, Heidegger’s Hut, and Adorno’s Hut: the escape from the everyday pressures of hyperconnected urban life we all crave; the exile we may find ourselves forced into; the retreat we dream of. 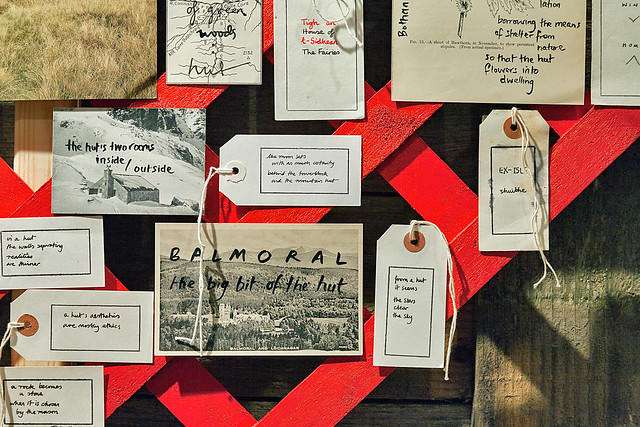 "From a Cabin in the Woods: Dieter Roelstraete's HUTOPIA and the Shelters of Thought," Momus, May 31, 2019.