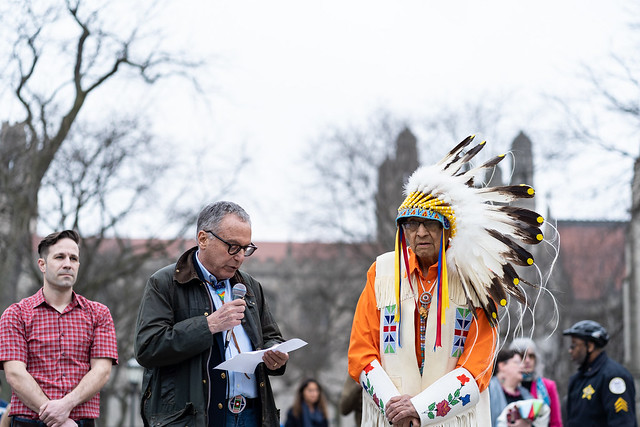 The Apsáalooke Women and Warriors exhibition at the Neubauer Collegium opened on March 12 with a parade led by a group of Apsáalooke dancers, drummers, elders, and participants on horseback. The event began on the University of Chicago’s Main Quadrangle with a land acknowledgment by Roman Family Director Jonathan Lear and a prayer led by Apsáalooke Sacred Tobacco Society Pipe Carrier Grant Bulltail. All photos by Max Herman. 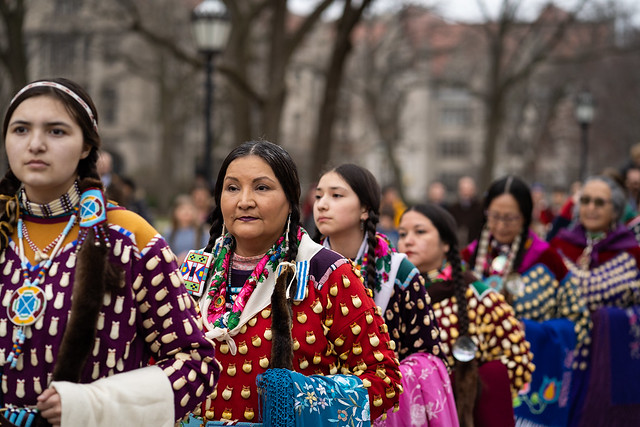 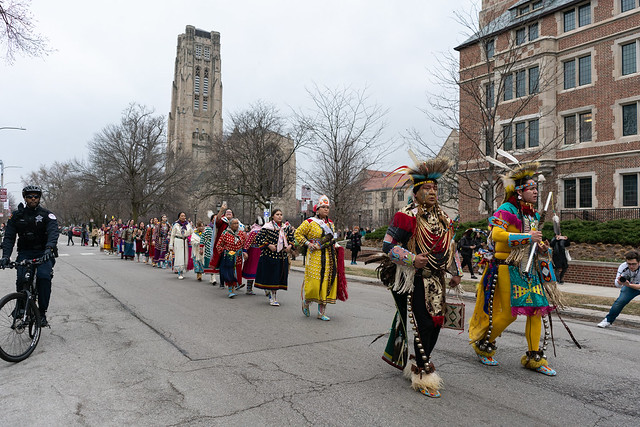 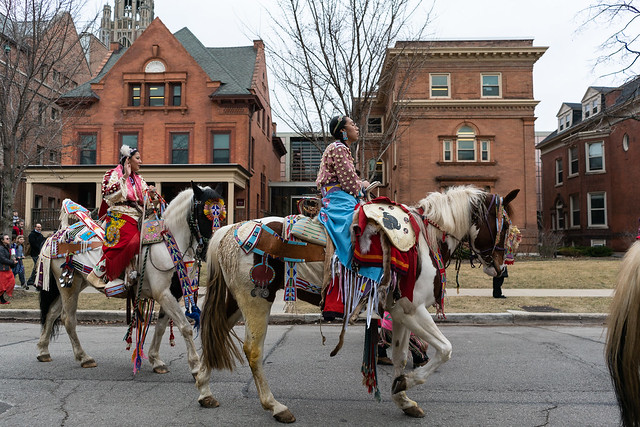 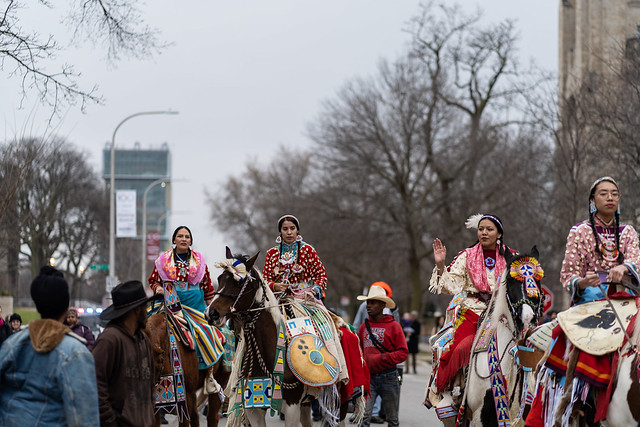 The parade proceeded from the main quad to the Neubauer Collegium, with stops along the way for ceremony and dancing. Many of the participants and their horses were dressed in full regalia. The honored women on horseback included (above, from left) Nina Sanders, JoRee LaFrance, Charmayne Hill, and Kami Jo White Clay. 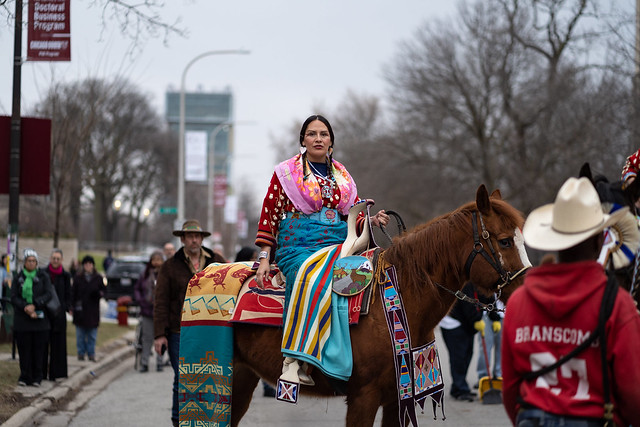 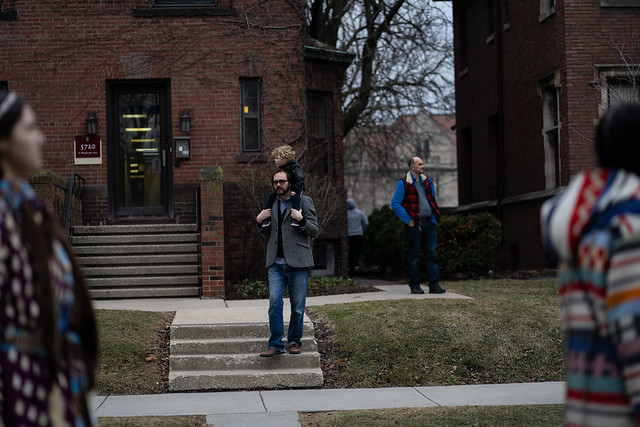 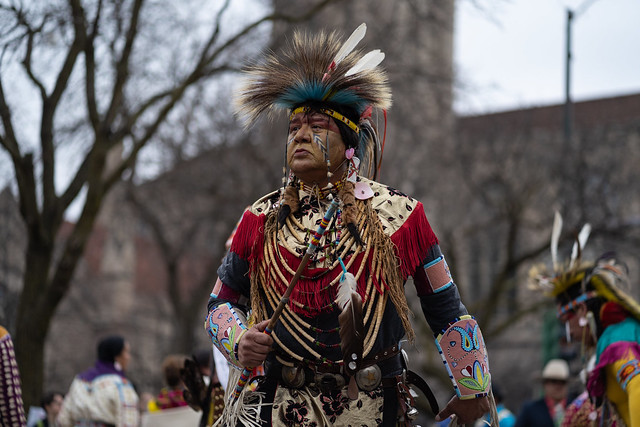 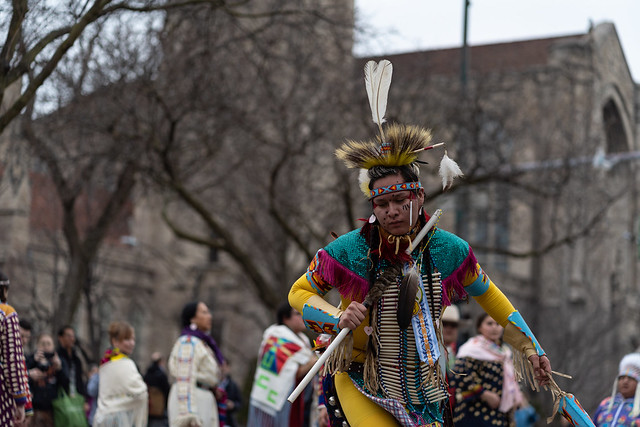 Crow Tribal Council member Sean Real Bird (above) and Kayden Holds the Enemy led a ceremonial dance at the intersection of Woodlawn Avenue and 57th Street. 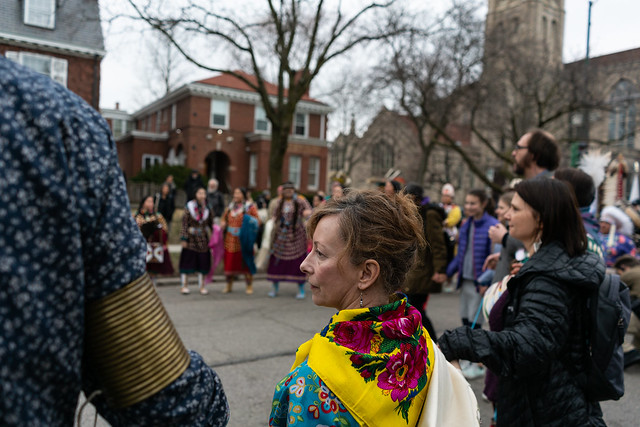 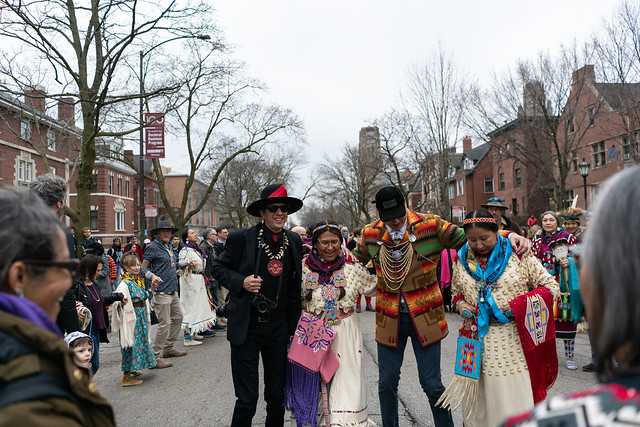 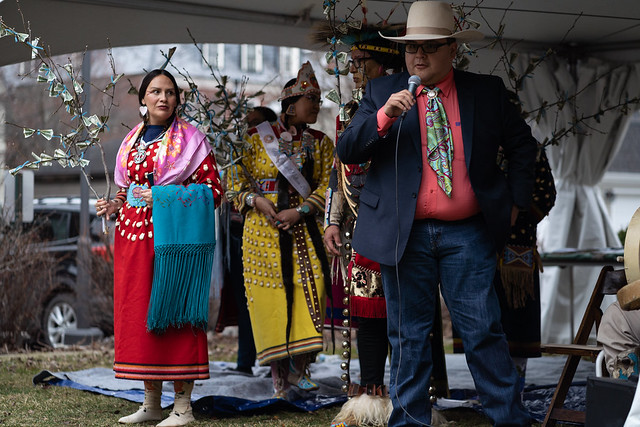 After the parade concluded, participants and guests gathered on the east lawn of the Neubauer Collegium for a gift exchange known as ammaakee/giveaway. Above, parade crier Riley Singer opens the ceremony with a song of praise for Nina Sanders. 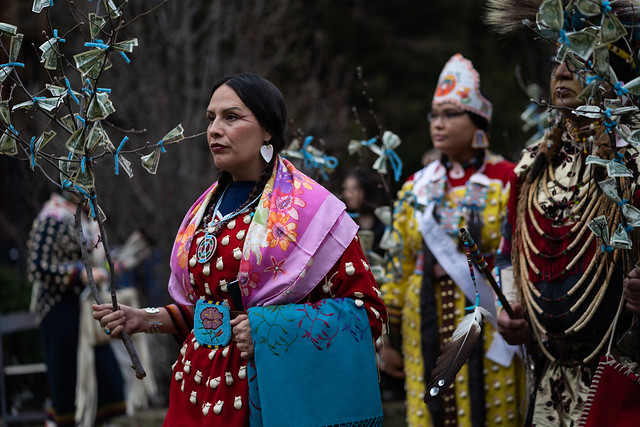 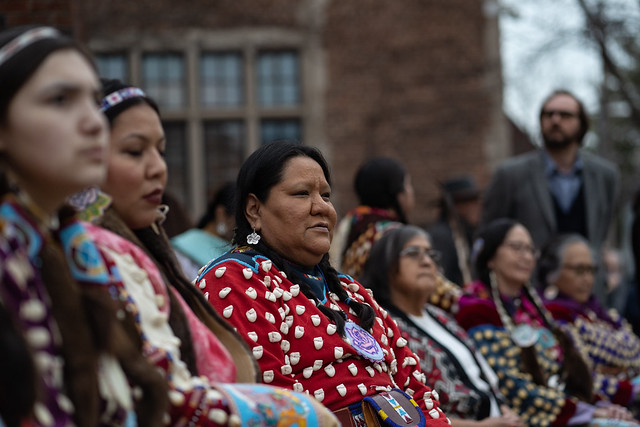 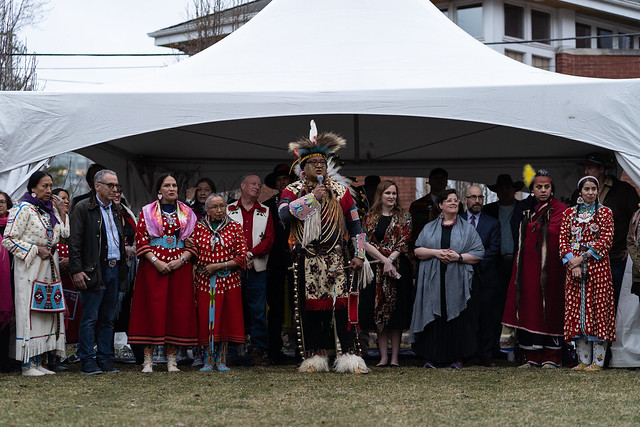 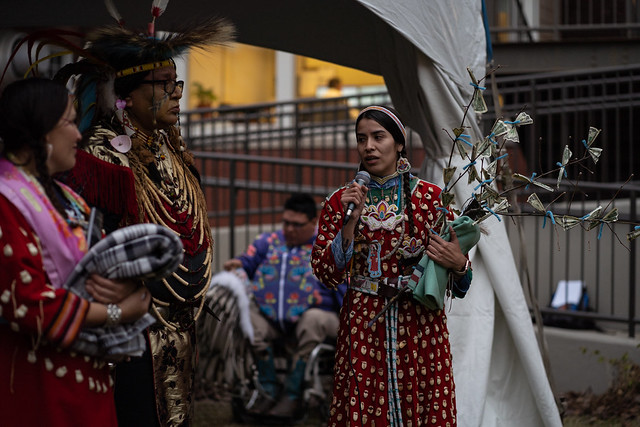 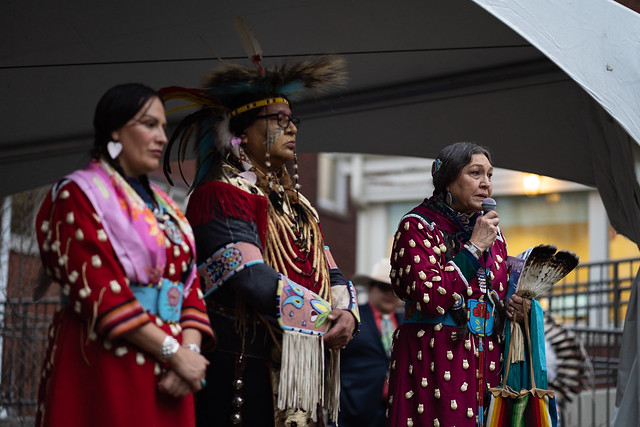 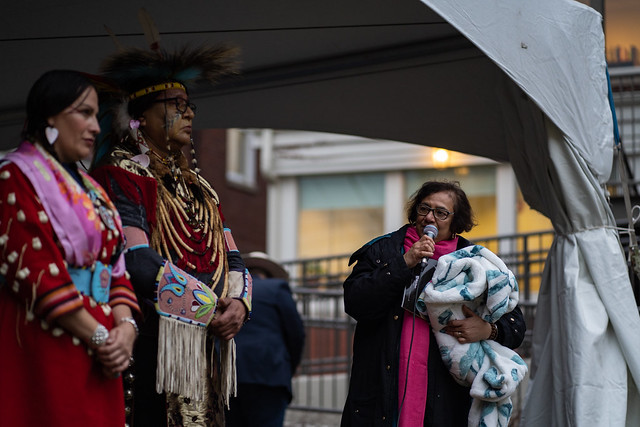 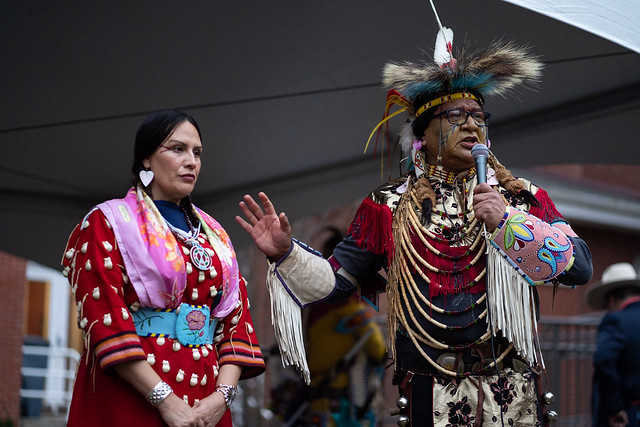 In one of the most significant moments of the event, Sean Real Bird announced that Nina Sanders had counted a “coup” for her outstanding work on the Apsáalooke Women and Warriors project. 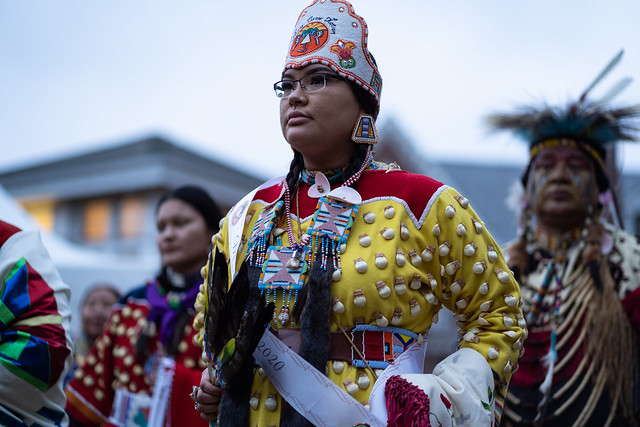 Aspen Real Bird (Miss Crow Nation 2020) led a celebratory round dance at the conclusion of the giveaway. 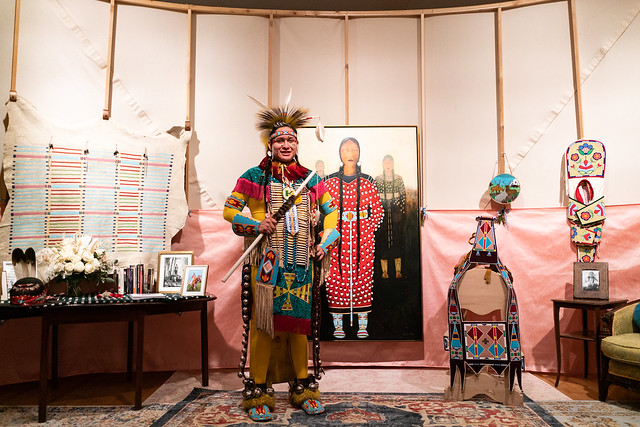 After the sun went down, Apsáalooke guests brought the festivities indoors for a private reception at the Neubauer Collegium. Above, Kayden Holds the Enemy stands in the exhibition gallery in front of Spring Time, a 2017 painting by Apsáalooke artist Kevin Red Star.