Infrastructures for the Comedic

The aim of this project was to build pedagogic, critical and aesthetic infrastructures through which the comic can be engaged as a scene of disturbance, a regime of corporeal technique, and a particular mood within aesthetic form. The comedic pokes fun at inelastic seriousness and inserts the threat of inappropriateness into painful scenes. Yet the study of the comedic is underdeveloped in contrast to the study of tragedy and catastrophe. We looked at incongruities of status and mind as social problems and problems of comic form. In addition to addressing these in theory and history--in a special issue of Critical Inquiry and a major conference on painting's humors--we explore the comedic through performance. We expected the performance or bodily component to be revelatory conceptually. Central to our concern were the phenomena of self-mastery, physiognomy, mimicry, bodily citation and gesture. What consequences do bodily habits and formal conventions have for the comic? What are the binding and liberating functions of format, genre, and archetype for the experience of mood, pleasure, and laughter? How do social ecologies of production contribute to these scenes? How do particular media, such as painting, theoretical writing, or performance, shift the comic encounter with pleasure and aggression? 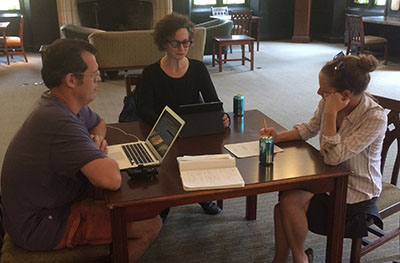 Lauren Berlant on the “Casual Power” of the Jokester

In this essay for The New Inquiry, English Professor Lauren Berlant (a Faculty Advisory Board member and principal investigator on the Infrastructures for the Comedic research project) considers Al Franken's resignation and the problematic links between jokesters and predators.

This is a workshop conference for the upcoming special issue of Critical Inquiry called Comedy, an Issue. Predistributed papers will be debated among the authors and audience so as to give everyone a shot at addressing the trouble comedy can make. For in addition to thematizing troubles--disturbances, breakdowns, absurdities, and shocks--comedy seems to get in trouble with more frequency than the other modes, practices, and attitudes. Read More >>

Painting and Its Humors

Painting and its Humors, a symposium is a day-long fling intended to let fresh air back into art after the much ballyhooed "Death of Painting.” The symposium examines painting as a site of theoretical improvisation and artistic slapstick in an effort to create alternate itineraries for thinking about what a work is, what artists do, and aesthetic experience. Read More >>