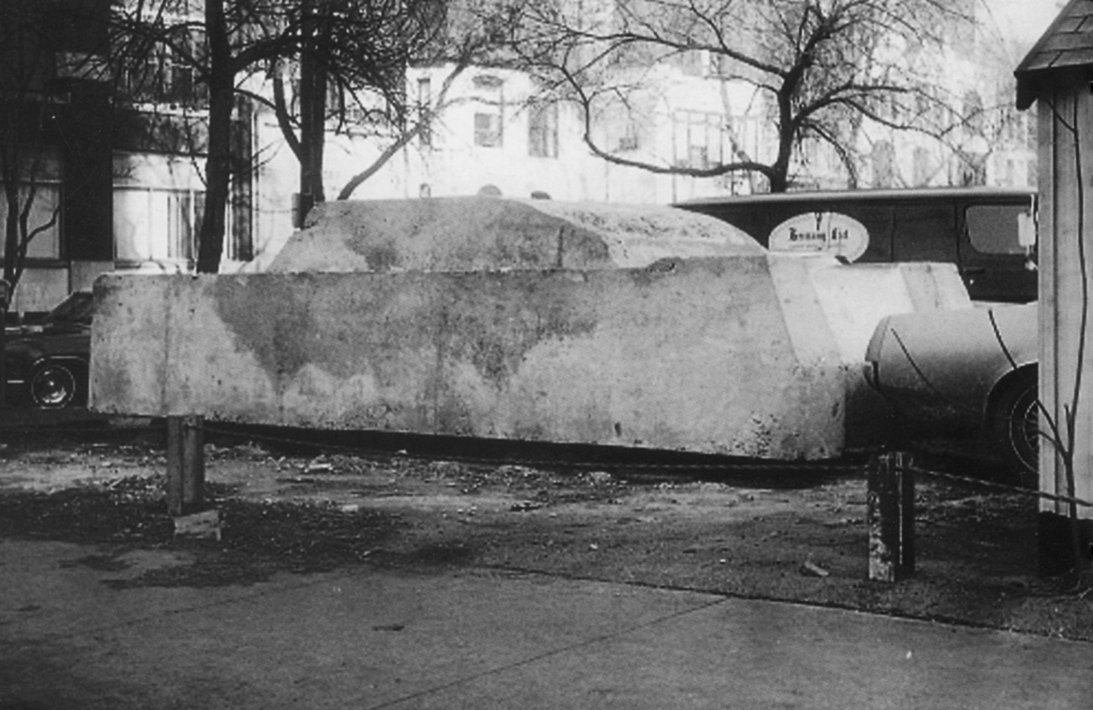 Concrete Traffic is a large-scale outdoor public sculpture consisting of a 1957 Cadillac, which, save for its undercarriage and whitewall rubber tires, is encased in several tons of concrete. Conceived by the German Fluxus artist Wolf Vostell (1932-1998) as an “instant happening” and an “event sculpture,”  Concrete Traffic was commissioned by the Museum of Contemporary Art in Chicago (MCA) under its first director, Jan van der Marck. Over the course of several weeks in late December 1969 and into January 1970, local artisans made the molds for the sculpture according to the artist’s instructions. On January 16, 1970, during the morning commute, local contractors poured concrete into the molds of the sculpture, in the middle of an active parking lot on Ontario Street at North St. Clair near the original MCA building. Several days later, the molds were removed, revealing a monumental concrete sculpture bearing the contours of the Cadillac embedded within. Given several months of parking fees along with the MCA’s status at the time as a non-collecting institution, the artist and the museum gifted the sculpture to the University of Chicago. On June 13, 1970, construction crews transported the sculpture via a flatbed truck to its new location just outside the University’s Midway Studios, at the southern side of 60th Street, near Ingleside Avenue.

The sculpture remained in this location for nearly 40 years, when in 2008 it was moved to make way for the construction of the Reva and David Logan Center for the Arts. Since 2008, the sculpture has been stored at a facility managed by Methods and Materials, specialist in large-scale fine art rigging and installation, located in the Humboldt Park neighborhood of Chicago. On April 29, 2015, Robert J. Zimmer, President of the University of Chicago, approved a new home for the sculpture on the University’s campus, in the University’s main parking garage situated between Ellis and Greenwood Avenues and 55th Street, adjacent to the Department of Art History and the David and Alfred Smart Museum of Art. Zimmer’s decision has now made it possible for conservation work to move forward.

A text commissioned by and written for the "Object Cultures Project"